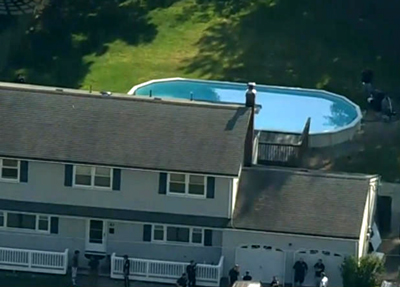 CBS New York's  Chopper 2 showed images of an above-ground swimming pool in the backyard where the three people were found dead.
A mother and grandfather who drowned in their backyard pool in New Jersey a week ago were trying to rescue an 8-year-old girl who had fallen in, police said. Bharat Patel, 62, his daughter-in-law Nisha Patel, 33, and her 8-year-old daughter were found unresponsive in the above-ground pool on the afternoon of June 22 by East Brunswick police responding to a 911 call from neighbors who heard screams.
East Brunswick Lt. Frank Sutter said the young girl had fallen into the pool, and her grandfather and mother were trying to save her when they, too, began to drown, CBS New York reported.
Middlesex County prosecutors and police said that while the above-ground pool was mostly shallow at 3 1/2 feet deep, a portion of the pool was 7 feet deep and "It doesn't appear that the victims knew how to swim."  Read more >>
Posted by Anthony Derek Catalano at 8:48 AM