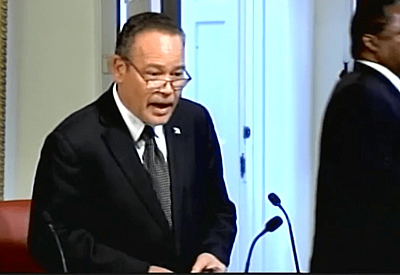 Attorney General Carl Bethel
By Sloan Smith
Opposition says “heads must roll”
NASSAU, BAHAMAS – Governor-General C. A Smith has signed a new proclamation declaring that a “state of public emergency exists in The Bahamas”.
The proclamation came into effect at midnight after the government failed to pass a resolution extending the initial state of emergency proclamation, which expired on Monday night.
The new declaration means the government is allowed to restart the six months extension period provided under Article 29 of the Constitution – with parliamentary approval.
Attorney General Carl Bethel yesterday apologized for what he termed a “procedural oversight” in allowing the declaration to lapse, taking full responsibility for the lapse.
“This is not the prime minister’s oversight,” Bethel said, during the evening sitting of Senate.
“This is not the government’s oversight. It is the oversight by my office and my oversight.
“I apologize for this procedural oversight to His Excellency the Governor-General, the prime minister, the government of The Bahamas, and the Bahamian people.”
He explained that that the Office of the Attorney General failed to deliver a resolution to extend the state of emergency in time for the document to be tabled in Parliament.  Read more >>
Posted by Anthony Derek Catalano at 10:04 AM