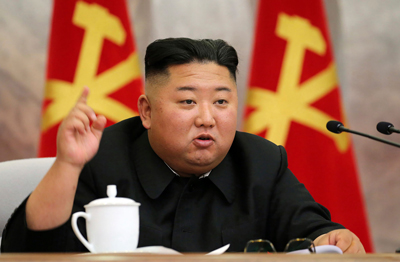 North Korean leader Kim Jong Un speaks during a meeting of the Seventh Central Military Commission of the Workers' Party of Korea, May 24, 2020, in North Korea. (Korean Central News Agency/Korea News Service/AP-File)
By Paul D. Shinkman Senior Writer, National Security
A collapse in negotiations between the Trump administration and Kim Jong Un has left Pyongyang with one option, it says: ‘To counter nuke with nuke.’
North Korea on Friday threatened to employ nuclear weapons against the United States, saying such drastic action represents the only remaining way to counter the threat it perceives from the Trump administration.
"In order to eliminate the nuclear threats from the U.S., the DPRK government has made all possible efforts either through dialogue or in resort to the international law, but all ended in a vain effort," North Korean state news wrote in an essay Friday morning about future prospects for peace, using an abbreviation for the country's official name. "The only option left was to counter nuke with nuke."
The troubling language from its state news service follows a steady escalation in North Korean provocations in recent weeks, including blowing up the liaison office earlier this month that it had established with South Korea two years ago. Analysts saw the move as part of an attempt by North Korean leader Kim Jong Un to reassert his control after disappearing for two weeks earlier this year.  Read more >>
Posted by Anthony Derek Catalano at 9:18 AM