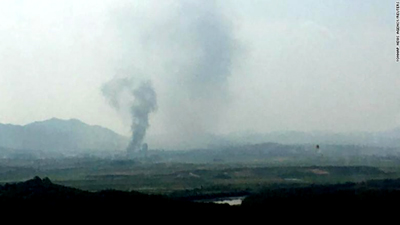 Smoke rises from Kaesong in this picture taken from Paju, South Korea.
By Joshua Berlinger, Jake Kwon and Yoonjung Seo, CNN
Seoul, South Korea (CNN) - North Korea has blown up a joint liaison office used for talks between itself and South Korea, the latest sign that ties between the two longtime adversaries are rapidly deteriorating.
North Korean state media reported that the four-story building, which is located in the town of Kaesong on the North Korean side of the demilitarized zone that divides the two Koreas, was "completely destroyed by a "terrific explosion" at 2:50 p.m. local time.
A plume of black smoke rising above the site was visible from the South Korean side of the border shortly after.  Read more >>
Posted by Anthony Derek Catalano at 5:17 AM