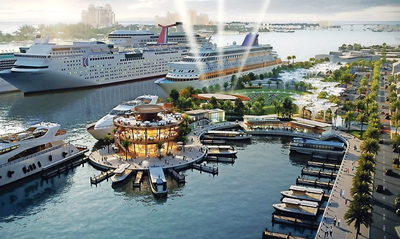 How the new waterfront could look, according to Global Ports Holding’s plans.
By NEIL HARTNELL
Tribune Business Editor
nhartnell@tribunemedia.net
Nassau Cruise Port yesterday confirmed it is steaming ahead with Prince George Wharf's transformation after raising $20m more than it needed from Bahamian and foreign investors.
The cruise terminal operator and its controlling owner, Global Ports Holding, described the $284.3m overhaul of a gateway that currently welcomes 4.4m passengers per year as "a definitely critical project" that cannot be delayed as they shrugged off the continuing fall-out and uncertainty caused by COVID-19.
Michael Maura, Nassau Cruise Port's chief executive, said the company's Board had decided to retain the $20m raised over and above the initial $130m target set for its recent bond financing raise. Some 200 investors placed money with the operator in what it describes as a vote of confidence in the project and the prospects for a cruise industry revival despite the sector extending its shutdown until September 15.  Read more >>
Posted by Anthony Derek Catalano at 9:21 AM