First Arrivals Due In From U.S. ‘Spike’ Zones 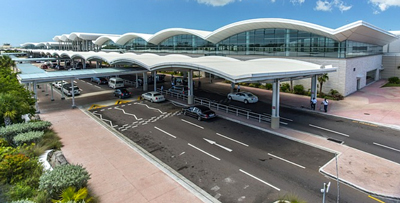 The Lynden Pindling International Airport.
By TANYA SMITH-CARTWRIGHT
ts-cartwright@tribunemedia.net
SIX flights are due to arrive in the country from the United States when international commercial travels resumes tomorrow, according to officials at Lynden Pindling International Airport.
Despite a serious spike in COVID-19 cases in the US, the country’s borders will fully open this week. Many of the incoming flights originate from cities and states where COVID-19 cases are high.   “Current flight projections show a total of six flights arriving from the United States on July 1 starting with Delta Airlines’ inbound service from Atlanta to Nassau at approximately 11.30am,” a statement from LPIA noted.
“Six flights are scheduled for departure on day one. Airlines have scheduled direct service to Nassau from key US gateways such as Charlotte, NC; New York (JFK); Denver; Houston; Baltimore; Newark; Miami and Ft Lauderdale along with service from Toronto, Canada.
“On arrival at LPIA, passengers should expect to have their temperatures taken as we begin to welcome guests. Persons showing symptoms of COVID-19 will be referred to the local health officials at the airport for further testing and evaluation.”
Based on current dashboard statistics, Florida and Houston are seeing a raging spike in COVID-19 cases and hospitalisations. New York and New Jersey, although numbers are still high, have seen a downward turn after governors came together and made a plan to lower the stats. North Carolina is seeing a spike in COVID-19 cases and Toronto’s numbers, after being low for a while, are starting to rise again. Colorado’s numbers seem stable.  Read more >>
Posted by Anthony Derek Catalano at 9:59 AM