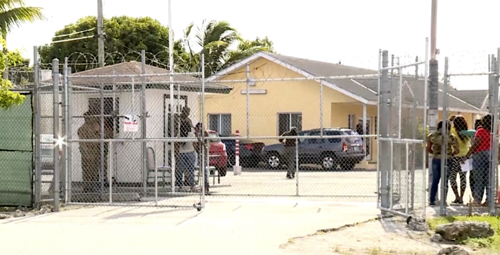 The Carmichael Road Detention Center
NASSAU, BAHAMAS — Some detainees at the Carmichael Road Detention Center destroyed fencing to mount an escape as tensions rise at the facility over the stalled repatriation process due to COVID-19.
In a statement, the Royal Bahamas Defence Force explained Haitian migrants at the facility launched a hunger strike and demonstrated “belligerent behavior” as they advocated to be returned to their country.
The strike reportedly took place around 8.47am.
The matter was de-escalated; however, the RBDF said a fight broke out between two Haitian men some two hours later.
“Some of the detainees were able to escape the dormitories, destroying several fences and other minor infrastructure in the process,” read the statement.
“The situation was contained, the detainees separated and several of them are expected to be charged with destruction of government property as well as to be placed at Her Majesty’s Correctional Facility.”  Read more >>
Posted by Anthony Derek Catalano at 5:46 AM