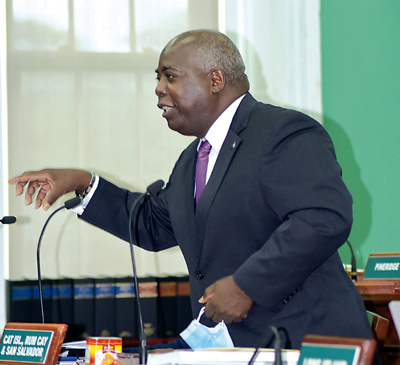 Philip Brave Davis
By Kyle Walkine
Opposition Leader Philip Brave Davis yesterday called for “heads to roll” after Attorney General Carl Bethel admitted that his office made an oversight that resulted in the emergency proclamation expiring at midnight last night.
“The attorney general has a course of action to take,” Davis said.
“The collapse of the legal regime regarding the extension of the proclamation of the state of public emergency only shows what we have said all along and it is that this government is shockingly inept and incompetent. This is an enormous embarrassment for and failure of this Minnis led government.
“The question must then be asked: If they got this simple procedural issue wrong then what else have they gotten wrong in the course of governance? This is just the latest in a series of missteps, misinformation and disinformation on the part of this government.
“Clearly, the public has no confidence in this Minnis-led government and the expectation is that heads must roll.”  Read more >>
Posted by Anthony Derek Catalano at 10:09 AM