Dames - If I Thought It Wrong, I’d Speak Out 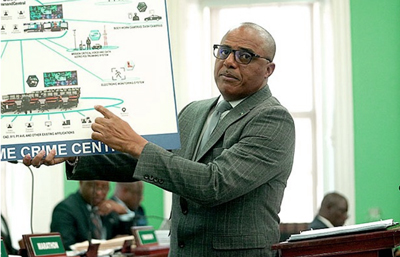 Marvin Dames, Minister of National Security.
By LEANDRA ROLLE
Tribune Staff Reporter
lrolle@tribunemedia.net
NATIONAL Security Minister Marvin Dames yesterday defended his character amid controversy surrounding the government’s handling of missing Hurricane Dorian victims, insisting that whenever he sees wrong “whether inside or outside Cabinet”, he will “express” himself.
Giving an impassioned contribution in the House of Assembly yesterday, Mr Dames rebuked critics over the matter, insisting he will never support any wrongdoing as it is his duty to protect the Bahamian people. His comments came after former Health Minister Dr Duane Sands blasted the Minnis administration’s handling of missing Dorian victims, noting that an explanation was needed for how hundreds of names were culled from official lists.
Although Mr Dames did not directly address Dr Sands in his speech yesterday, he made a veiled reference to the former Cabinet minister.
He said: “I hold no grudge against anyone, no indifference against anyone. I take my job very seriously because at the end of the day, I have to account to the people who elected me to serve as their member of Parliament and account to the party who entrusted in me their confidence and account to my leader for having selected me to serve as the minister within this Cabinet.
“You see because we can come into this place as is and that’s what been going on for decades and we can make up but at the end of the day, the Bahamian people know best.”  Read more >>
Posted by Anthony Derek Catalano at 9:02 AM