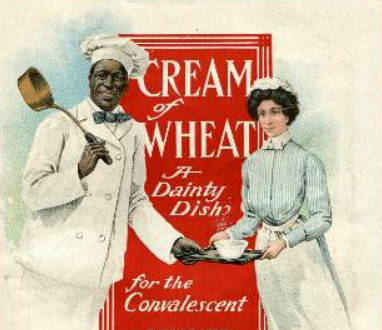 Advertisement for Cream of Wheat by the Cream of Wheat Company in Minneapolis, Minnesota, 1902.
By Chauncey Alcorn CNN Business
New York (CNN Business)Cream of Wheat just became the latest major food brand to announce a review of its controversial mascot following the global uproar over the George Floyd tragedy, which has compelled corporations to reflect on their roles in perpetuating racism.
Aunt Jemima was the first food brand Wednesday to announce it is changing its logo, which for decades has been widely criticized as a racist caricature of a black maid stemming from slavery. Hours later, Uncle Ben's and Mrs. Butterworth's followed suit.
The pressure mounted for other brands Wednesday night when Cream of Wheat's parent company, B&G Foods, issued a statement saying it too has initiated a review of its packaging, which features the image of a black cook widely believed to be based on Chicago chef Frank L. White, who died in 1938.  Read more >>
Posted by Anthony Derek Catalano at 6:14 AM