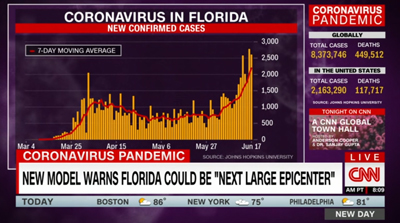 By Madeline Holcombe
(CNN)The pressure is on for local leaders to respond to regional Covid-19 spikes and records, and some are turning to mask mandates.
Statewide, Californians will be required to wear face coverings in indoor public places, Gov. Gavin Newsom announced Thursday. To the north, Oregon Gov. Kate Brown announced a similar mandate for seven counties beginning June 24.
Similar measures are being considered in North Carolina and Arizona, where Scottsdale Mayor Jim Lane is developing an ordinance with a legal team.
Each of those four states, along with six others, is currently reporting its highest seven-day average of new coronavirus cases per day since the crisis began, according to a CNN analysis of data from Johns Hopkins University. The others are Alabama, Florida, Nevada, Oklahoma, South Carolina and Texas.
Florida could be the next epicenter, experts say. And Oklahoma, where cases are up 110% from last week, is preparing to welcome large crowds in Tulsa on Saturday for a rally for President Donald Trump.  Read more >>
Posted by Anthony Derek Catalano at 6:38 AM