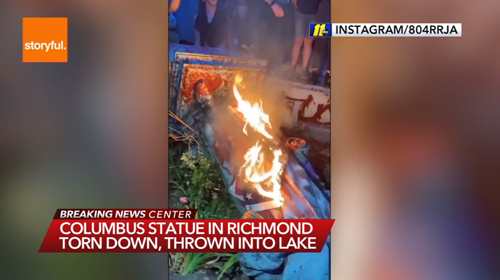 RICHMOND, VA. -- A statue of Christopher Columbus in Richmond has been torn down by protesters, set on fire and then submerged into a lake.
News outlets report the figure was toppled less than two hours after protesters gathered in the city's Byrd Park Tuesday chanting for the statue to be taken down. The figure was removed from its pedestal around 8:30 p.m. Tuesday by protesters using several ropes.
The statue was then set on fire and submerged into a lake in the park. A sign that reads, "Columbus represents genocide" has been placed on the spray-painted foundation that once held the statue. (source)
Posted by Anthony Derek Catalano at 7:36 AM