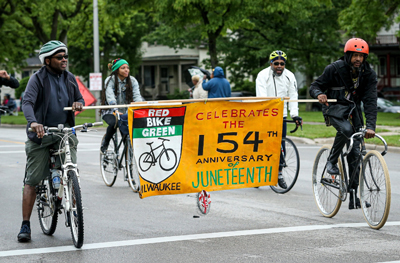 Members of a parade perform during the Juneteenth Day Festival on June 19, 2019, in Milwaukee. In the wake of protests following the killing of George Floyd, there has been a push to make Juneteenth a federal holiday. Dylan Buell/Getty Images for VIBE
By Marisa Penaloza
Corporate executives and sports officials are joining a growing number of elected officials who want to recognize Juneteenth, a day that commemorates the end of slavery, as an official U.S. holiday. The movement is being fueled by the Black Lives Matter protests demanding reforms following the killing of 46-year-old George Floyd by Minneapolis police on May 25.
Juneteenth, which is on June 19, has long been an important holiday in the African American community, a time for celebration rather than mourning and remembrance.
This week, NFL Commissioner Roger Goodell decided to close league offices on June 19.
"This year, as we work together as a family and in our communities to combat the racial injustices that remain deeply rooted into the fabric of our society, the NFL will observe Juneteenth on Friday as a recognized holiday and our league offices will be closed," he wrote in an email to employees.  Read more >>
Posted by Anthony Derek Catalano at 6:55 AM