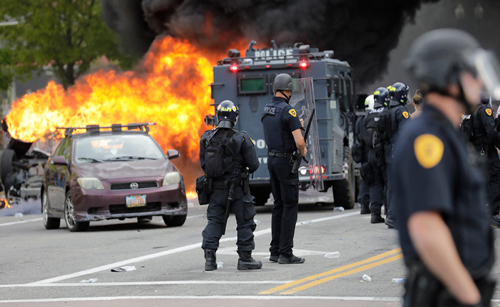 A policemen watch as a vehicle burns as protesters demonstrate Saturday, May 30, 2020, in Salt Lake City. Thousands of people converged on downtown Salt Lake City on Saturday to protest the death of George Floyd in Minneapolis, and some demonstrators set fire to a police car and threw eggs and wrote graffiti on a police station. AP
By The Nassau Guardian
As violent protests continue across some parts of the United States, the Bahamas Consulate General in New York has cautioned Bahamians against getting involved.
“We wish to advise Bahamians traveling throughout, temporarily and permanently living within the U.S. but especially those cities affected, to exercise appropriate caution generally,” the consulate said in a statement on Sunday.
“Do not be confrontational and always cooperate with the directives and instructions of State and local officials.
“If there is any issue, please allow consular officers from The Bahamas to deal with the matter. Do not get involved in political or other demonstrations under any under circumstances and avoid crowds.”
Protests and riots erupted across the United States following the death of George Floyd, a Black man who was killed while being detained by police officers in Minneapolis on May 25. While some protests have been peaceful, in some parts of the United States buildings were burned and businesses looted.
Bahamas Ambassador to the United States Sidney Collie told The Guardian on Saturday that his office as well as the consulate in Atlanta, Georgia, are “monitoring the situation in Fulton County, Atlanta, and Minneapolis, Minnesota, where states of emergencies have been invoked”.
The Bahamas has consular offices in New York, Washington, Miami and Atlanta and honorary consuls in Los Angeles, Denver, Chicago and Houston.  (source)
Posted by Anthony Derek Catalano at 8:49 AM