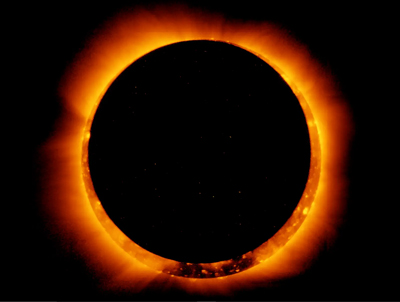 An annular solar eclipse as seen by Japan's Hinode spacecraft on May 20, 2012. JAXA/NASA/Hinode via Getty Images
By Holly Secon
The event, known as an annular solar eclipse, occurs when the moon is at the farthest point from Earth in its orbit and passes between our planet and the sun. The moon partially covers the sun, but its small size in the sky means the sun's outer rim remains visible, making it look like a bright ring.
People in parts of China, Central African Republic, Congo, Ethiopia, India, and Pakistan will be able to watch the full annular solar eclipse. The event will begin for those in Central Africa — the first location to see the eclipse — on Sunday, June 21 at 4:47 a.m. local time. It will end for the last areas to see it — parts of China — at 8:32 a.m. local time. (That's at 12:47 a.m. and 4:32 a.m. ET if you watch remotely from the US.)
A partial annular eclipse will also be visible in southern and eastern Europe and northern Australia.
If you are able to catch the solar eclipse in person, make sure to wear proper eye protection, since staring directly at the sun causes eye damage.  Read more >>
Posted by Anthony Derek Catalano at 7:09 AM