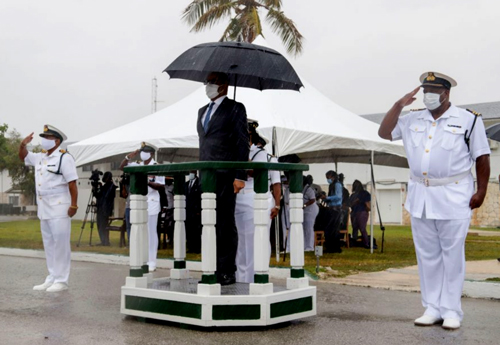 #Coral Harbour Base, Nassau, The Bahamas – 10 MAY ‘20 (RBDF): In a somber gathering at the Defence Force Base this morning, four marines killed in action 40 years ago were remembered during a wreath laying ceremony in commemoration of the bombing and sinking of HMBS Flamingo on May 10, 1980.

The significance of the day soaked through like the rainstorms that ensued as it happened. In attendance were Minister of National Security, the Honourable Marvin Dames, Permanent Secretary in the Ministry of National Security, Mr. Marco Rolle, Acting Commander Defence Force, Captain Raymond king and his Senior Command. In keeping with the COVID-19 Emergency Orders, one representative from each of the four families were represented.

Lieutenant Commander Whitfield Neely, the lone current serving member represented the surviving crew members. Wreaths were placed at the HMBS Flamingo Memorial Park Monument and also near the water’s edge in remembrance of all those who were part of the tragedy that rocked the nation.  Read more >>
Posted by Anthony Derek Catalano at 7:37 AM