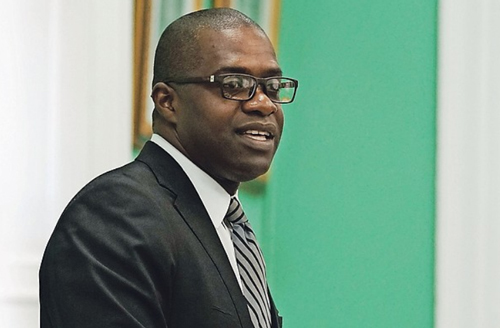 Financial Services, Trade and Industry and Immigration Minister Elsworth Johnson.
By LEANDRA ROLLE
Tribune Staff Reporter
lrolle@tribunemedia.net
THE Bahamas’ unemployment rate has soared to nearly 50 percent due to layoffs brought about by the COVID-19 pandemic, a government minister revealed yesterday.
And with the jobless rate so high Immigration Minister Ellsworth Johnson warned not all work permit holders will be able to get their permits renewed. Instead, Mr Johnson said foreigners granted work permits would be replaced by Bahamian workers who have been deemed “competent” by officials to take over those roles.
This, according to the minister, is part of the government’s efforts to tackle unemployment in the country amid the pandemic.
Speaking ahead of a Cabinet meeting yesterday, he told reporters: “We know that 50 percent of the population is unemployed, some work permits will not be renewed. Where we have fit and proper competent Bahamians to do the job, they will be given that opportunity to do the job.
“And so, what we have done in the (interim), because persons are sheltering in the Bahamas, the competent authority has extended annual work permits with the understanding that we’ve already refused some work permits.  Read more >>
Posted by Anthony Derek Catalano at 8:31 AM