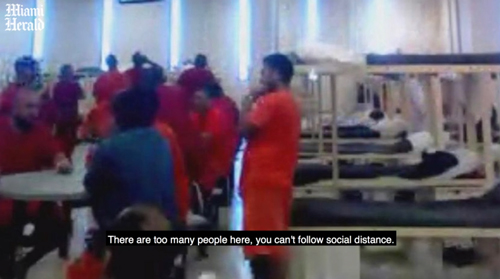 Detainees at Krome Processing Center in Miami-Dade and Broward Transitional Center in Pompano Beach have been begging to be released since the coronavirus pandemic started. They say they have no access to professional protective equipment. By Courtesy of Miramar Circle of Protection | Marta Oliver Craviotto

In a strongly worded 12-page order filed late Thursday, U.S. District Judge Marcia G. Cooke said U.S. Immigration and Customs Enforcement has acted with “deliberate indifference” to the condition of its detainees. She ordered the agency to report to her within three days how it plans to cut its non-criminal and medically vulnerable populations by the hundreds.

The judge also ordered the agency to submit weekly reports on the releases. After 10 days, ICE is to begin filing twice-weekly reports. Within two days, she ordered, ICE shall also provide masks to all detainees and replace them once a week.  Read more >>
Posted by Anthony Derek Catalano at 7:10 AM