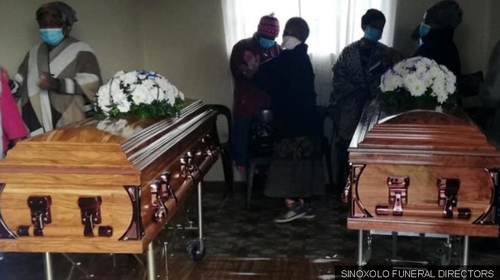 Restrictions have been placed on funerals.

A ban on large funerals in South Africa has forced people to give up many traditions, but they have also rediscovered old ones, including "secret burials", as the BBC's Pumza Fihlani reports from Johannesburg.

All it took was one funeral and 40 people were infected with coronavirus.

On 21 March, less than a week after President Cyril Ramaphosa had declared a national state of disaster and banned large gatherings to help contain the spread of coronavirus, around 100 people attended a funeral ceremony in Majola village, Eastern Cape.

The village, which lies in the sleepy rural community of AmaMpondomise, is now the epicentre of the virus in the area. The 21 March funeral, along with two others in the city of Port Elizabeth, account for 200 Covid-19 cases in the province - about a quarter of the total.  Read more >>
Posted by Anthony Derek Catalano at 8:33 AM