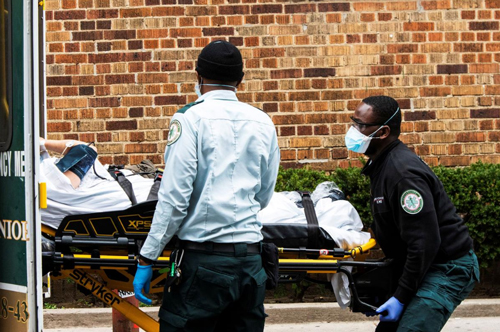 Healthcare workers load a person into an ambulance outside of the Elmhurst Hospital center as the outbreak of coronavirus disease (COVID-19) continues in the neighborhood of Queens in New York, U.S., April 5, 2020. REUTERS / Eduardo Munoz

(Reuters) - The U.S. death toll from the novel coronavirus reached 50,000 on Friday, having doubled in 10 days, according to a Reuters tally.

More than 875,000 Americans have contracted the highly contagious respiratory illness COVID-19 caused by the virus, and on average about 2,000 have died every day this month, according to a Reuters tally.

The true number of cases is thought to be higher, with state public health officials cautioning that shortages of trained workers and materials have limited testing capacity.

Deaths are also likely higher, as most states only count hospital and nursing home victims and not those who died at home. About 40% of the deaths have occurred in New York state, the epicenter of the U.S. outbreak, followed by New Jersey, Michigan and Massachusetts.  Read more >>
Posted by Anthony Derek Catalano at 7:03 AM