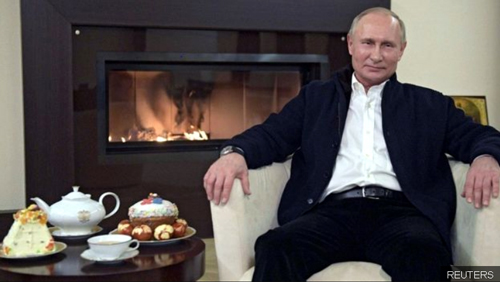 President Putin at his dacha (holiday home) near Moscow - he addressed Orthodox Christians at Easter in a TV address.

"I thought he understood. But there've been no results, and the government's measures are not enough. We just have to manage, ourselves."

With the International Monetary Fund predicting the worst global recession since the 1930s Great Depression, Russia's economy is clearly not immune.

Neither are its politicians, including President Putin. He has crafted an image for himself over his long rule as the leader who lifted Russia out of the post-Soviet chaos to bring order and prosperity.

Mr Putin had planned to play on that trademark "stability" this week by winning a nationwide vote to alter the constitution and clear his way to stay in power for another two terms. But the ballot was reluctantly postponed, judged too dangerous at the height of a pandemic.  Read more >>
Posted by Anthony Derek Catalano at 5:21 AM