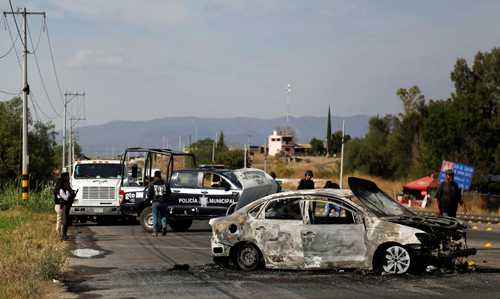 Police stand by the wreckage of a burned-out car on the outskirts on Celaya in Guanajuato. A top analyst said it was ‘business as usual’ for the cartels. Photograph: Sergio Maldonado/Reuters

Mexico’s homicide rate raced to a new record in March, as violence raged even as Covid-19 spread across the country and authorities urged the population to stay home and practise social distancing.

The surge in killings comes as federal and state officials put resources into containing the Covid-19 crisis and confront the prospect of an already sluggish economy falling even further – potentially deepening the misery for the more than 40% of the population living in poverty.  Read more >>
Posted by Anthony Derek Catalano at 5:31 AM