Coronavirus batters the Navajo Nation, and it's about to get worse

The fear of what's ahead is based on precedent. During the swine flu epidemic of 2009, Native Americans died at four to five times the rate of other Americans. 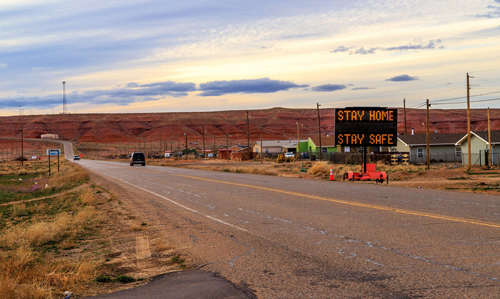 A sign in Many Farms, Ariz., tells Navajos to stay home as the tribal nation experiences an increasing number of coronavirus cases.Nina Mayer Ritchie

On March 17, when the Navajo Nation saw its first COVID-19 case, the reservation's limited health facilities sprang into action.

"We basically changed our hospital from an acute care hospital and an ambulatory care clinic to one that could take care of respiratory care patients," said Dr. Diana Hu, a pediatrician at one of the reservation hospitals. "And that transition happened over a period of about seven days."

It didn't take long for one case to turn into two, and then 20. As of Monday, the Navajo Nation, which sprawls across three states, had 1,197 positive coronavirus cases. It has a per capita infection rate 10 times higher than that of neighboring Arizona and the third-highest infection rate in the country behind those of New York and New Jersey. Forty-four people have died, more than in 14 other states.  Read more >>
Posted by Anthony Derek Catalano at 6:38 AM