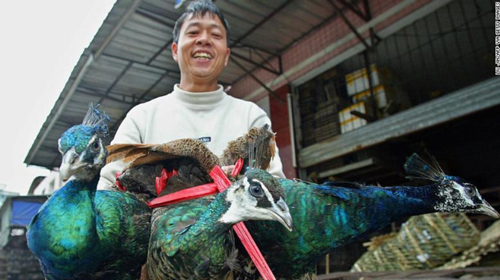 China has made eating wild animals illegal after the coronavirus outbreak. But ending the trade won't be easy

Hong Kong (CNN) - The Chinese government has issued a new draft list of livestock that can be farmed for meat in the wake of the coronavirus epidemic, which is suspected to have originated from wild animals in a Wuhan wet market.

Beijing temporarily banned all trade in wild animals for food following the outbreak, which has now spread globally to infect more than 1.6 million people, but the new law has yet to be finalized.

China's Ministry of Agriculture issued a draft list of animals considered fit to be used as livestock on Wednesday night, including dietary staples such as pigs, cows, chickens and sheep, as well as "special livestock" such as a number of species of deer, alpaca and ostriches.  Read more >>
Posted by Anthony Derek Catalano at 6:09 AM