China's Coronavirus is Waning. It's Propaganda Fight is Not. 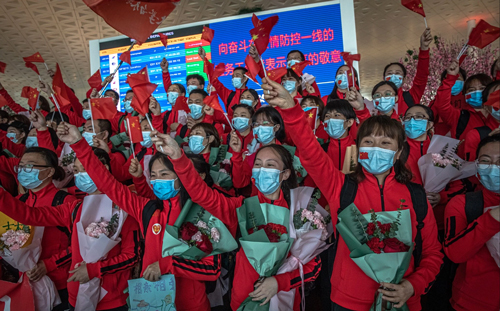 Medical workers from a hospital in eastern China cheered as they prepared to leave Wuhan after the lockdown was lifted on Wednesday.Credit...Roman Pilipey/EPA, via Shutterstock

HONG KONG — For months the Chinese government’s propaganda machine had been fending off criticism of Beijing’s handling of the coronavirus outbreak, and finally, it seemed to be finding an audience. Voices from the World Health Organization to the Serbian government to the rapper Cardi B hailed China’s approach as decisive and responsible.

But China could not savor the praise for long. In recent days, foreign leaders, even in friendly nations like Iran, have questioned China’s reported infections and deaths. A top European diplomat warned that China’s aid to the continent was a mask for its geopolitical ambitions, while a Brazilian official suggested the pandemic was part of China’s plan to “dominate the world."

As the pandemic unleashes the worst global crisis in decades, China has been locked in a public relations tug-of-war on the international stage.  Read more >>
Posted by Anthony Derek Catalano at 4:32 AM