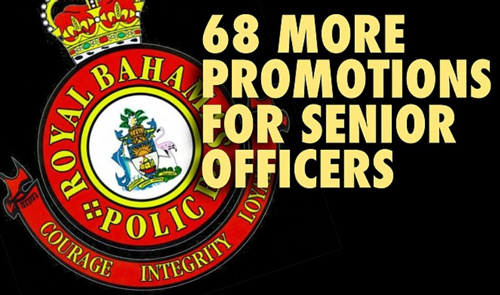 NEARLY 70 Royal Bahamas Police Force officers were promoted to Chief Superintendent and Superintendent yesterday, in an exercise that is backdated to take effect from January 1.

Among them was the RBPF’s lead investigator in the trial of former Cabinet minister Shane Gibson. Deborah Thompson, attached to the Financial Crimes Unit, was promoted to the rank of Superintendent from Assistant Superintendent.

During the high-profile trial, she admitted that she was wrong to have jointly interviewed local businessman Jonathan Ash and Deborah Bastian to “synchronise” their claims against the former parliamentarian.

At the time, the police officer said in hindsight, she acted improperly in arranging to meet with both Mr Ash and Ms Bastian to “clear up the ambiguities” in their respective statements against the former labour minister.  Read more >>
Posted by Anthony Derek Catalano at 8:04 AM