Video: On The Streets With The Police On Night One Of The Curfew 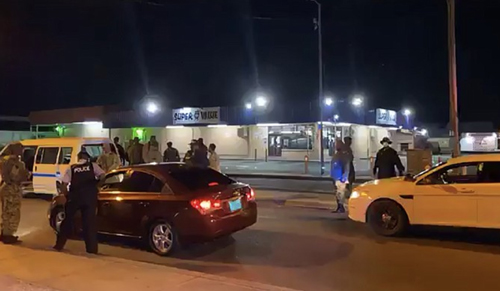 Police on the streets on Friday night.

THE normally busy streets of Nassau were eerily silent Friday night after a national curfew officially came into effect in an effort to fight the COVID-19 threat.

After 9pm on Friday, streets where persons once roamed freely appeared deserted while popular restaurants and nightspots were closed.

Instead, the streets were heavily patrolled by police officers, who actively combed the streets in search of persons contravening the new emergency orders as issued by Prime Minister Dr Hubert Minnis on Thursday.

Under the orders, Dr Minnis mandated residents in the country remain inside their homes until March 31 between 9pm and 5am. Persons are also barred from attending recreational or competitive sporting events and other social events.

Noting that the measures are necessary to ensure the safety of all Bahamians in view of the COVID-19 pandemic, Commissioner of Police Anthony Ferguson urged members of the public on Friday to adhere to the guidelines as issued by government officials.  Read more >>
Posted by Anthony Derek Catalano at 6:33 AM