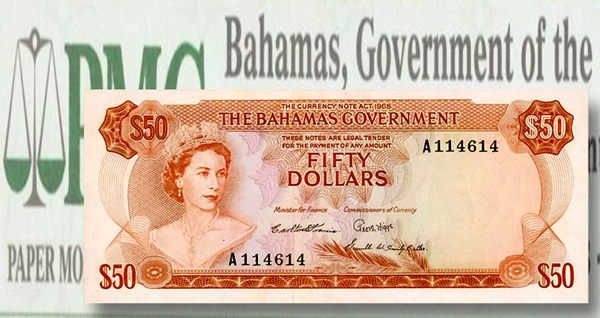 At $32,400 including buyer’s fee, an unlisted triple-signature Bahamas $50 note from 1965 more than doubled its $15,000 high estimate at the Stack’s Bowers Galleries world currency auction in New York on Jan. 18.

The note is part of the first issue of dollar-denominated notes after the Currency Note Act of 1965 changed the currency from sterling to dollars.

Only a $50 note with the two signatures of Sands and Higgs was previously known to have been issued. That note is considered scarce and sells in the thousands when offered. Notes with the three signatures of Francis, Higgs, and Butler were until now known only on specimens.

Posted by Derek Catalano at 7:56 AM