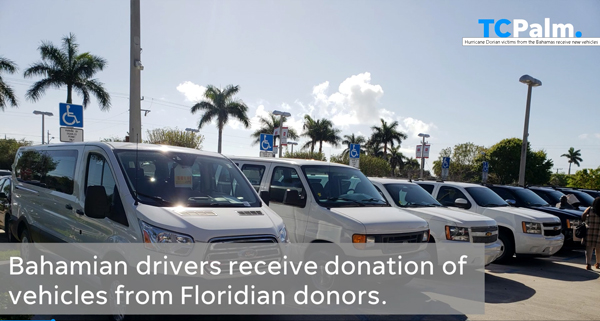 Wednesday, at Ed Morse Auto Group in Delray Beach, the Stuart Sailfish Club Foundation bought 10 vehicles to be used as taxis in the Bahamas.

Lisa Moss knew exactly which one she wanted. After all, a new car is one of those things that kind of chooses you more than you choose it.

Moss was among 10 Bahamian families who came to a Delray Beach car dealership Wednesday to receive a donated car. It was the culmination of a GoFundMe effort for Hurricane Dorian victims, which began even before the killer winds stopped howling.

The first few days of September, the horrific storm of nearly unprecedented strength shredded the lives of thousands who reside in the northern Bahamas.

Moss and her husband lived through the storm's terrifying onslaught and, like many of her friends, family and neighbors, lost nearly everything. The couple, who are cab drivers, lost their home and their car — their primary means of earning an income.  Read more >>
Posted by Anthony Derek Catalano at 5:52 AM