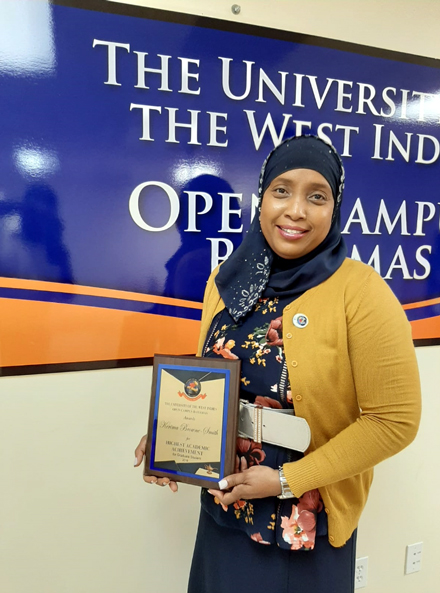 Now that Kerima Smith has completed her Master of Science degree in Management Studies with distinction from the University of the West Indies (UWI) Open Campus Bahamas and snagged the top graduate award, the zealous woman is more fervent about higher learning.

“UWI has ignited in me this passion for research and constant learning. The benefits of a Master’s degree for me is beyond pay; I feel I have been transformed mentally. It opens my eyes about my purpose of being here, particularly just having done research,” said Ms. Smith, who is Chair of the Office Systems and Administration department at The Bahamas Technical and Vocational Institute (BTVI).

Ms. Smith’s thesis was, ‘An Investigation into the Human Resource Management Practices at ABC Institute and their Impact on Employee Turnover and Retention.’

It was a special awards ceremony organized by the UWI Guild Chapter to recognize those in The Bahamas who couldn’t attend the graduation ceremony in Antigua and Barbuda in October 2019. It was at that time when Ms. Smith was afforded the opportunity to speak on behalf of the six graduates of the online program.

“After my speech, my son said, ‘Yeah. That’s my mummy!” It was the cherry on the cake,” said Ms. Smith, beaming.

“The next morning, he said, ‘Mummy, I want to be just like you.’ I said, ‘No baby, I want you to be better than me,’” recalled Ms. Smith, whose speech was dedicated to her late parents, Khalid and Khadijah Abdul-Hadi – both of whom died while she was studying towards her degree.

Additionally, when Ms. Smith started her Master’s degree in January 2017, she simultaneously took office as Chair of her department at BTVI.

“I had to prove myself. I was tasked with pulling the team together, working on projects and starting a Master’s degree after a 14-year break from college,” said Ms. Smith.
The following year, Ms. Smith’s father took ill.

“When my father went into the Intensive Care Unit, I took on three classes at the Master’s degree level. I had group members in Grenada, Jamaica, Barbados - all over the Caribbean - with no emotional ties. While they understood, I still had to meet my deadlines. UWI has very high standards,” she said.

Also within that two year of studying, besides experiencing the death of her parents, Ms. Smith also had a dear colleague, Ann Knowles, who passed away.

“They were three blows. When I finally got the degree, I was happy, but sad. Like my aunt said, ‘God is stretching you so your story could be a testimony to others,” stated Ms. Smith.

“My mother ate, slept, breathe education. The ambitious person I am is her. She graduated as a Registered Nurse from the then College of The Bahamas (COB) – now the University of The Bahamas - at 40 and we were in COB together. My father, on the other hand, I need him just for intellectual conversation. They ingrained in me being analytical and not allowing anyone to be unjustly treated.

Receiving my award was bittersweet. I wish my parents were here for me to share it with them,” said Ms. Smith.

Furthermore, Ms. Smith’s mother passed away the day before BTVI’s 2018-2019 awards, an event Ms. Smith was heavily involved with. She was not in the frame of mind to attend the ceremony, but little did she know, she would be awarded Faculty of the Year.

In the interim, Ms. Smith had a good support system, which she said was imperative to help her get through the challenges.

“My husband, Juel Smith; my aunt, Lynn Perry and my sister, Khalida Abdul-Hadi were my biggest supporters and cheerleaders,” she stated.

It is because of her innate persistence and family support that Ms. Smith kept pushing for higher.

“When I set a goal, I am so focused. I don’t allow anything to stop me from achieving it. I jump over obstacles.  You just have to do it. Be like Nike. No excuses; excuses put blocks in your way. Keep pushing,” she stressed.