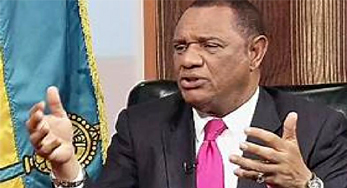 Nassau, January 25 (RHC)-- Perry Christie -- the Prime Minister of Bahamas from 2002-2007 and 2012-2017 -- has emphasized the prestige of Cuba's medical collaboration during a meeting with the staff of the Cuban diplomatic mission in Nassau.

Ambassador Alejandro Garcia del Toro wrote in his official Twitter account that the historic diplomatic relations between the two nations were discussed during the dialogue with the Bahamian politician.

Christie also highlighted Cuban collaboration in education, which has allowed teachers to work in different schools in the Bahamas.  The former minister pointed out the work of Cuban specialists in Special Education, whose experience and dedication have been remarkable.

The ambassador expressed interest in continuing to expand bilateral ties, especially in areas to combat climate change, disasters and the development of renewable energy.  (source)
Posted by Anthony Derek Catalano at 5:37 AM