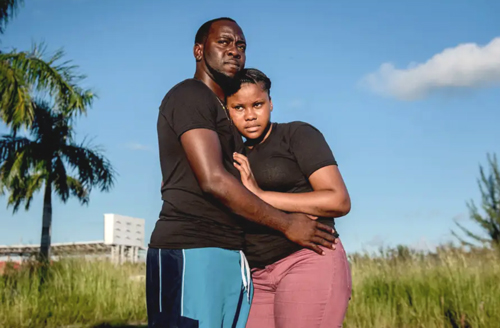 Yvener Isma, and his girlfriend, Diana, outside of the Kendal G.L Isaacs National Gymnasium complex in Nassau, which is being used as the primary government shelter for people displaced by Hurricane Dorian.

GREAT ABACO, The Bahamas — Yvener Isma keeps telling himself, “if the storm didn’t break me, this won’t break me,” but it’s getting harder and harder to believe. He feels like he’s dying inside, slowly, and he blames his government.

Nearly two months ago, the 27-year-old was clinging to a tree as Hurricane Dorian battered the Bahamas, holding his girlfriend, Diana, as floods and winds propelled shipping containers straight into them. The couple made it out of Marsh Harbour “by the grace of God,” but not before Diana — who only wanted her first name used — broke her wrist, twisted her ankle, and tore a bone-deep hole in her shin. The 19-year-old from Haiti is still healing, but her injuries are the least of her worries.  Read more >>
Posted by Anthony Derek Catalano at 4:41 AM