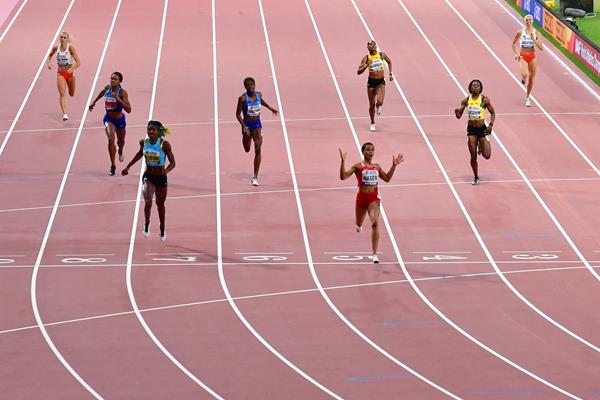 When Salwa Eid Naser overturned expectations of the women’s 400m final at the IAAF World Athletics Championships Doha 2019, she evoked the memories of races past.

Most thought that Shaunae Miller-Uibo – the Olympic champion, the fastest woman in the world this year, the woman who could have won the 200m-400m double here if only the timetable allowed – would turn back any challenge the young Bahraini athlete could throw at her.

Most of us, then, were wrong.

Starting two lanes to Miller-Uibo’s inside, Naser had made up most of the stagger by the end of the back straight. She then powered clear on the bend and defied the favourite’s efforts to run her down.

Naser ran 48.14, almost a full second better than her previous best and a time bettered only by world record-holder Marita Koch (47.60 at the IAAF World Cup in Canberra in 1985) and the woman who preceded Koch as world record-holder, Jarmila Kratochvilova (47.99 at the first IAAF World Championships in Helsinki in 1983).

Miller-Uibo was almost as brilliant in defeat. Her 48.37 makes her the sixth-fastest ever, a personal best by 0.60. She ran fast, Naser simply ran faster.

Watching Miller-Uibo and Naser in their heats and semi-finals here, many fans were struck by the physical reminders of two other great rivals in the 400m – Marie-Jose Perec and Cathy Freeman.
Read more  >>