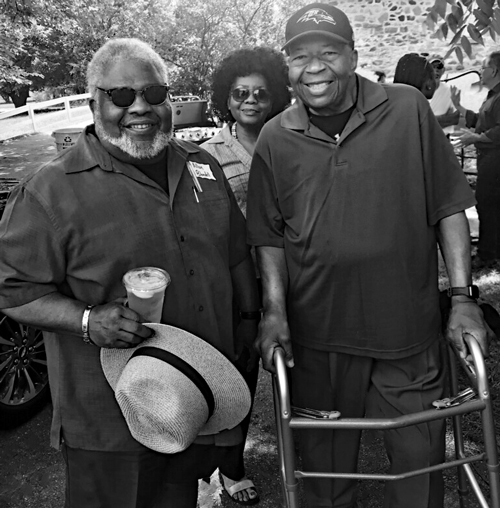 Bahamian American Allan St. John Blondell (left) and Helena Duhart-Blondell (center) with U.S. Congressman Elijah Eugene Cummings, Chairman of the powerful Committee on Oversight and Reform this past July at a picnic hosted by the Congressman for his constituents of Howard County, Maryland.  Sadly, Congressman Cummings passed away last Thursday at the age of 68 after complications from longstanding health problems.

Cummings was an American politician and civil rights advocate who served in the United States House of Representatives for Maryland's 7th congressional district from 1996 until his death last Thursday. The late Congressman’s district include just over half of the city of Baltimore, most of the majority-black precincts of Baltimore County, as well as most of Howard County.

A member of the Democratic Party, Congressman Cummings previously served in the Maryland House of Delegates from 1983 through 1996. That year, he was elected to the U.S. House. Cummings served as the chair of the Committee on Oversight and Reform from January 2019 until his death.)

Congressman Cummings graduated from law school at the University of Maryland School of Law, receiving his Juris Doctor in 1976, and was admitted to the Maryland State Bar Association later that year. He practiced law for 19 years before first being elected to the House in the 1996 elections.

Allan and Helena Blondell, longtime friends of Congressman Cummings, are themselves residents of Howard County, Maryland which is frequently cited for its affluence, quality of life, and excellent schools. Howard County is a very diverse community.  According to Jamie Smith Hopkins of the Baltimore Sun “the richest people in Howard County's richest corner are minorities. Median household income for blacks and Asians in the census tract that includes most of Clarksville outstripped what whites in that area earned in 1999, according to 2000 census data released yesterday. In a surprising show of economic power, African American and Asian households each out-earned whites in 30 percent of the census tracts in the county - the 10th wealthiest in the nation. Hispanic households earned more than whites in about 45 percent of Howard's tracts.”

The late Congressman will lie in state” this Thursday in Statuary Hall of the Capitol ahead of his funeral in Baltimore on Friday, October 25 Congressional officials announced.

In addition, a public viewing has been scheduled for this Wednesday, October 23, at Morgan State University in Baltimore. The late congressman had served on that University's Board of Regents.
Posted by Anthony Derek Catalano at 6:08 AM