Face To Face: Wise Words From A Boy Who Simply Cares For Others 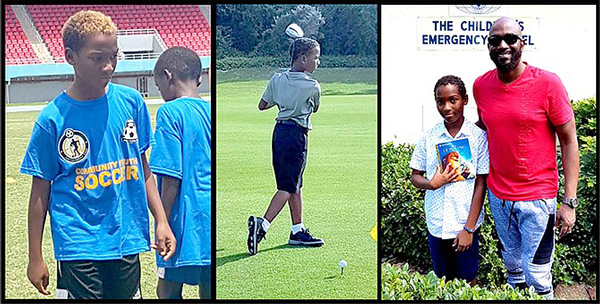 Makaio playing football, left; on the golf course, centre; and with the founder of A Hand Up Foundation, Mark Brown.

I was blown away by the thoughts of a ten-year-old boy who was asked to jot down in his own words some sentences about the abuse of children. I’ve known Makaio Mackey to be a high achiever since he was very young. Like my son Elijah, Makaio is an avid golfer. His mother India would rave about Elijah’s golfing skills and she felt encouraged that her son would do well in the sport.

Elijah is now 23 and still hitting the green as often as possible. Makaio’s mom is teaching her son the importance of stickability in life. She has no problem convincing him to come into his own. He is finding his own ways of self expression. When Makaio found out that his mom’s co-worker had an organisation that regularly visits children’s homes in The Bahamas, he immediately wanted to be a part. He told his mother he wanted to read to the kids and thus began a relationship between him and the children that is likely to last a lifetime.  Read more >>
Posted by Anthony Derek Catalano at 6:11 AM