In Abaco Islands, the letter D marks the site of a grim recovery effort 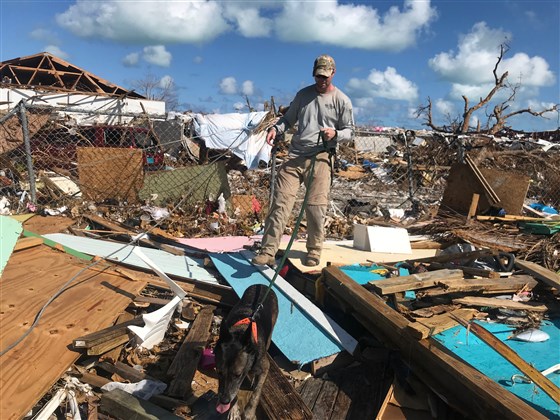 Richard Graham, a search and rescue volunteer, searches for bodies with his canine MiKo among the rubble in the neighborhood the Mudd, in Abaco Island, Bahamas on Sept. 10, 2019. Mariana Henninger / NBC News

MARSH HARBOUR, Bahamas — Three men were walking through the tattered neighborhood known as the Mudd in the Abaco Islands on Tuesday morning when they came upon the remnants of a home with the symbol of a diamond spray-painted on a wall left standing. A single letter D was painted in the center.

Next to it were two arrows, indicating the presence of two dead bodies stuck in the mountainous debris.

More than a week after Hurricane Dorian flattened the shantytown into massive piles of wood and steel, the search and rescue effort has shifted to recovering the remains of those killed by the catastrophic Category 5 storm.  Read more >>
Posted by Anthony Derek Catalano at 10:06 AM