Atlanta Holds A Day of Prayer For The Bahamas Bishop Delton Fernander offered a hand of comfort to Rev. Silbert Mills, Pastor of Friendship Tabernacle who wept as he described how his house fell around him and water beat down his doors as he tried to comfort his wife, their children and grandchildren, including a 10-week-old when Hurricane Dorian hit Abaco, The Bahamas.

Written by Arthia Nixon for Bahamas Consulate General of Atlanta

Atlanta, Georgia… It was an emotional evening at the historic Ebenezer Baptist Church in Atlanta, Georgia on Tuesday, Sept 18, 2019 as representatives from the diplomatic corps, civil rights moment, and Caribbean diaspora joined icon Xernona Clayton, Bahamas Consul General Astra Armbrister-Rolle and members of the Bahamas Christian Council to pledge support during a night of prayer for The Bahamas.

During the service, a representative from Congressman John Lewis’ office confirmed that he was supporting Bahamians getting temporary protective status in The United States.

As devastating images flashed across the screens, showing the impact of Hurrican Dorian to Grand Bahama and Abaco, tears were shed in the congregation as choirs sang and clergy members offered words of encouragement.

Perhaps the most poignant moment of the evening was when Bishop Delton Fernander offered a hand of comfort to Rev. Silbert Mills, Pastor of Friendship Tabernacle who wept as he described how his house fell around him and water beat down his doors as he tried to comfort his wife, their children and grandchildren, including a 10-week-old. During the eye of the storm, they made the choice to flee for the church. He recalled the 205 souls who sought refuge watching in horror, unable to open the door and risk the wind taking off the roof as a woman held on to a tree for two hours and a couple blew by. 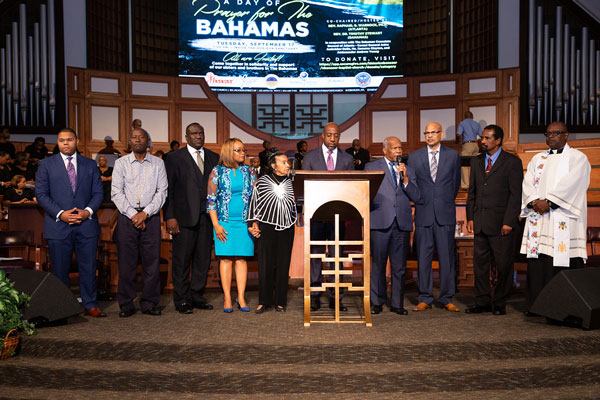 Bahamas Consul General to Atlanta Astra Armbrister-Rolle and friend to The Bahamas Xernona Clayton join members of The Bahamas Christian Council and Atlanta clergy at historic Ebenezer Baptist Church to pray for The Bahamas in the wake of Hurricane Dorian.

Consul General Armbrister-Rolle shared that in the hours of the storm first making landfall, she was contacted by Bahamians in her jurisdiction who were concerned and was already thinking of ways to connect. She expressed her gratitude to all those who have assisted the nation in the aftermath of the tragedy, noting that through Caring For Others, Inc and Delta Airlines, she personally traveled with them to deliver the first ten thousand pounds of relief to The Bahamas last week. The mother of a young son, Armbrister-Rolle expressed her thoughts for the youngest victims who she hopes will be able to recover from the trauma and all that they have seen and experienced and lost in the storm.

“The city of Atlanta and The Bahamas are no strangers to each other,” said Armbrister-Rolle. “And I am so happy to stand here as the CG and say that the connections that were forged during the time of Dr. Martin Luther King Jr. and some of the people that you see here, they still exist and I am happy and proud that they will continue to exist in the foreseeable future.” 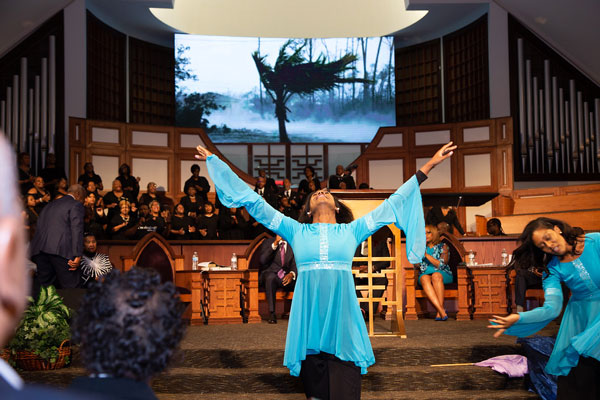 Through song, dance, and prayers, Ebenezer Baptist Church in Atlanta held a Day of Prayer for The Bahamas. 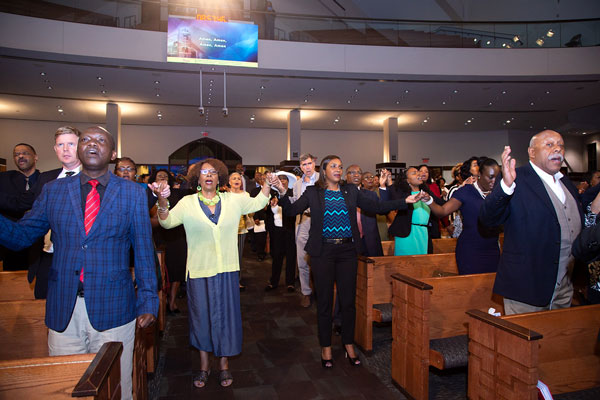 The congregation of Ebenezer Baptist Church in Atlanta joining hands in song to during a Day of Prayer for The Bahamas in the wake of Hurricane Dorian.
Posted by Anthony Derek Catalano at 6:55 AM