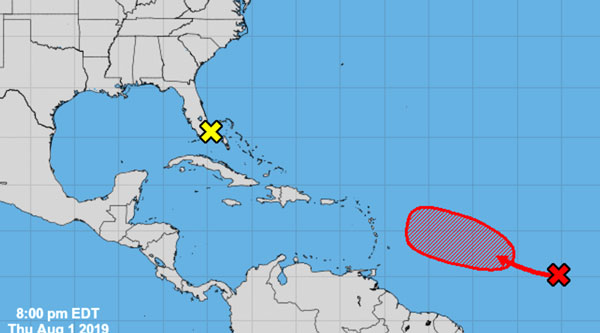 The tropical 5-day forecast from the National Hurricane Center issued August 1, 2019, shows two disturbances in the Atlantic Ocean. The first, marked by the yellow 'X' may bring rainfall to the east coast through the weekend, but isn't expected to strengthen or develop. (NOAA)

CHARLESTON, SC (WCIV) — Two areas of tropical weather are worth keeping an eye on over the next several days and into next week.

The first is a large area of tropical moisture currently over the Bahamas and southern Florida.

Locally heavy rainfall will come to parts of the Florida peninsula and Georgia as the system moves northward.

However, the National Hurricane Center said Thursday the disturbance is not expected to strengthen or organize into a more powerful system.  Read more >>
Posted by Anthony Derek Catalano at 6:04 AM