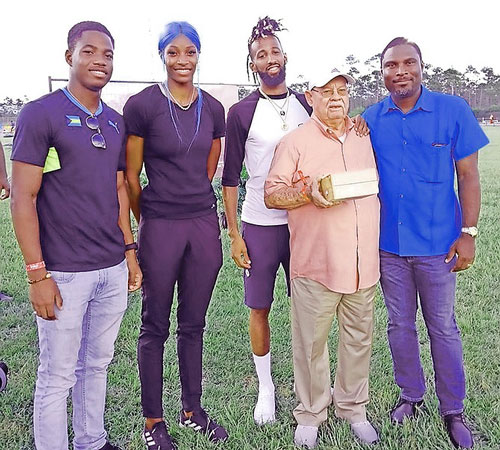 OVER the span of his 45-year career, Ronald Cartwright has coached athletes who went on to excel as medallists at the CARIFTA, Central American and Caribbean, Pan American, Commonwealth Games, World Championships and Olympic Games.

He was presented with an Omega watch, thanks to the contribution of the Bahamas Olympic Committee, Gurth Knowles of Dozer Heavy Equipment, Claude Bryan of On Track Management, the BAAA, world high jump champion Donald Thomas, Olympic champion Shaunae Miller-Uibo, and Harrison Petty of the Colony Club and BAAC.

Accepting the gift, Cartwright said he feels special because some of his close friends and some of the athletes, including minted CARIFTA high jump gold medallist Shaun Miller Jr and Olympic champion Shaunae Miller-Uibo, were there.  Read more >>
Posted by Anthony Derek Catalano at 6:26 AM