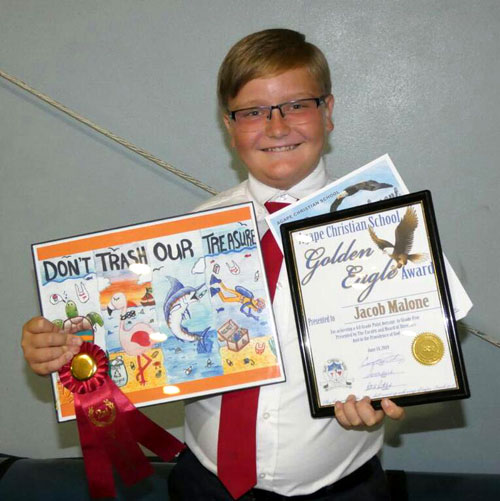 BLUE LAGOON ISLAND, BAHAMAS – An Abaco student’s artwork depicting the damage that can happen if we don’t all protect the ocean has been internationally recognized by the marine zoological facility Delphinus, located just outside of Cancun, Mexico.

Jacob Malone, an 11-year-old fifth grader at Agape Christian School in Marsh Harbour, Abaco, won 2nd place in the International Festival of the Oceans Drawing for his creative illustration of the theme ‘Don’t Trash Our Treasure.’

As a member of the Alliance of Marine Mammal Parks & Aquariums, Blue Lagoon Island submitted 28 of the top qualifying pieces of this year’s art into the international children’s art competition in Mexico. A number of the Bahamian submissions were prominently displayed at the arrivals concourse of the Cancun International Airport.

Though Delphinus only awarded a prize to the 1st place international winner of the Mexican competition, Blue Lagoon Island teamed up with its sister company Treasure Cay Beach, Marina & Golf Resort in Abaco to recognize Jacob’s accomplishment.


In addition to the prize earned for his national placement, Jacob was also awarded a family dinner for four at any of the resort’s restaurants in Treasure Cay.

Jacob’s art teacher, Faith Malone, said they were all excited to learn of his second place recognition.

“It’s fantastic. I don’t think Agape has ever placed in one of the competitions, so this opens doors for not only Jacob, but the school as well,” she said upon hearing the news.
She described Jacob as a top student who is also extremely creative. He was the school’s only primary school student to attain a 4.0 GPA this year.

At his school’s award ceremony, Jacob was recognized for his impressive art achievement and received a framed photo of his artwork, his national award ribbon, an international certificate of achievement from Delphinus and his prizes.

“I am ecstatic and really proud of Jacob for being recognized for the amazing work that he did,” she said, adding “The amount of time and effort he put into creating the art piece and then having it shipped to us from a Family Island shows a level of dedication that deserves to be recognized not just locally but internationally. His art work depicts the negative effects of marine debris while showcasing his Bahamian pride through the flag and our national fish.”

Jacob’s art was one of nine Agape art pieces that Ms Malone entered into the national competition. She said art is an important way for young Bahamians to express their opinions and concerns about important issues like marine debris and conservation.

“Art allows people to be able to see this important message visually and not just hear about it. Artwork like the piece Jacob created helps people actually picture it and see what is happening and what could happen if we don’t stop trashing our treasure,” she said.