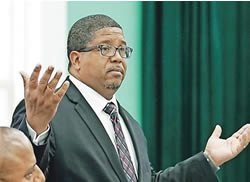 He said the Government had overbudgeted by BS$53 million (A$76 million) because it suffered from “a historical pattern” of overbudgeting due to the failure to remove from the payroll workers who had either resigned or retired.

This had reduced funding on other public spending priorities, such as the security forces, health, education and social services, the Deputy Prime Minister said.  Read more >>
Posted by Anthony Derek Catalano at 5:02 AM