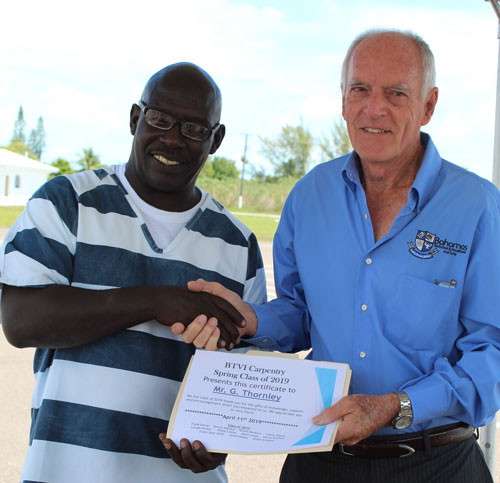 BTVI carpentry instructor, Graham Thornley receives a certificate of appreciation from an inmate at the graduation ceremony of the Citizen Security & Justice program.
Photos: BTVI

The second cohort of inmates in a training program facilitated by the Bahamas Technical and Vocational Institute (BTVI) graduated on Thursday.

The ceremony held at the Bahamas Department of Correctional Services honoured 80 inmates who completed basic training in carpentry, barbering, garment manufacturing, computer, auto mechanics, electrical installation and plumbing. The Citizen Security & Justice program is a part of a $3.4 million component of an Inter-American Development Bank-financed project geared towards the rehabilitation and reintegration of offenders.

The newly announced Commissioner of Corrections, Charles Murphy, noted that the skills learned in the 10-week program have given them the ability to survive in society upon release.

“You are equipped to move into the workforce without hindrance. Studies reveal that individuals who participate in studies while incarcerated, seldom or never return to prison…I hope you be a part of that grouping that never returns,” said Commissioner Murphy.

Additionally, Minister of National Security, the Honourable Marvin Dames, emphasized that the prison is moving from penal to correction.

“Most people don’t expect much from men and women in prison…we are truly committed to correctional reform by adopting holistic changes that focus on rehabilitation and reducing recidivism.

The more educational programs inmates are involved in, recidivism is reduced. Everyone, regardless of the past, should have the opportunity to strive in the future,” he said.

“Life outside these prison walls are complicated. Therefore, an expansive and holistic preparation is needed…soft skills are necessary to making sound decisions,” he added.

Minister Dames pointed to gaining technical vocational education and training (TVET) as an important aspect of preparation for release.

Also bringing remarks during the ceremony was BTVI’s President, Dr. Robert W. Robertson, who said the institution is pleased to be a part of the “revolutionary program,” that gives both male and female prisoners a second chance.

“These inmates no doubt have hope as a result of this training and it could very well be their passport to employment opportunities upon release…I understand a barbering participant from the first cohort, who has since been released, is now actually working as a barber. That, ladies and gentlemen, speaks to the validity of this program and is evidence that the walls of prison do not have to be roadblocks to learning,” said Dr. Robertson, resulting in applause from the crowd. 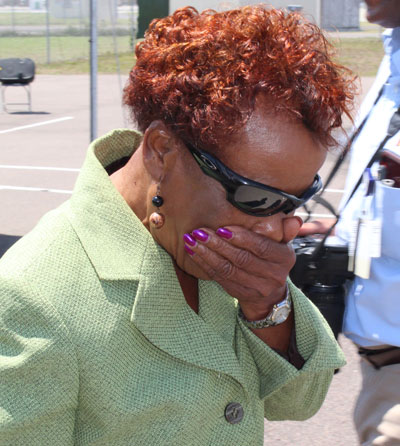 BTVI adjunct instructor, Shirley Pearson, becomes emotional as she listens to an inmate at Her Majesty’s Prison speak of how well she treated them during the 10-week skills training program.

Dr. Robertson added that BTVI is committed to the goal of training some 600 inmates over the two-and-a-half-year span and invited the inmates to apply to the institution to further their skills upon completion of their sentences.

Inmate, Walden Clarke, said the program has had a positive impact on the cohort and they appreciate the opportunity afforded them.
Posted by Derek Catalano at 5:44 AM