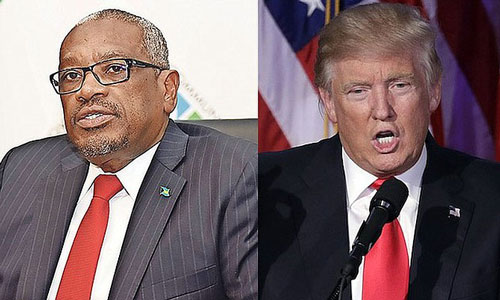 CHINESE officials in the Bahamas say they are confident the people and government of the Bahamas will see through the fabrications and “irresponsible accusations” put forth by the United States, referring to planned talks between US President Donald Trump and various regional leaders.

In response to questions raised by The Tribune following the meeting’s announcement by the Office of the Press Secretary at the White House late Tuesday, Charge d’Affaires of the Chinese Embassy in the Bahamas Haigang Yin yesterday accused the US government of trying to “disintegrate solidarity and cooperation between China and other developing countries.”

He also fired back against the “predatory economic practices” label the US has placed on China’s activities in the Caribbean, dismissing it as completely baseless, unreasonable and contradictory to the facts.

The US statement on the high-level talks noted that President Trump will meet with the leaders of the Bahamas, the Dominican Republic, the Republic of Haiti, Jamaica, and Saint Lucia on Friday to reaffirm the US’ strong friendship with and commitment to these countries, and signal the importance of the Caribbean to the hemisphere.  Read more >>
Posted by Anthony Derek Catalano at 6:10 AM