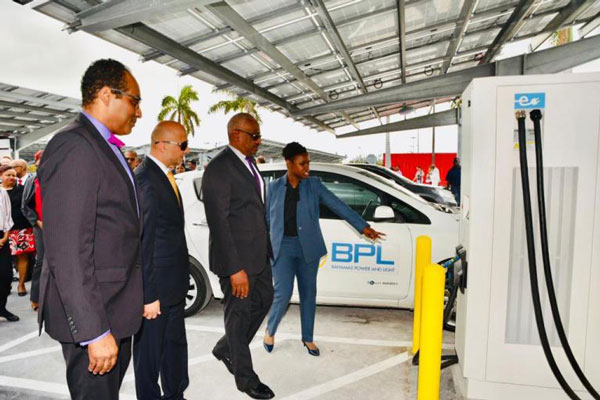 Prime Minister Dr. Hubert Minnis officially opened a 925- kilowatt solar plant facility at the Thomas A. Robinson National Stadium on Monday. The facility, the largest of its kind in The Bahamas, is expected to replace the equivalent of 310,000 gallons of diesel annually, and will also serve as a carport with electric vehicle charging stations. It was made possible by a grant from the Government of the United Arab Emirates, through the UAE-Caribbean Renewable Energy Fund. BIS photo by Yontalay Bowe.

NASSAU, BAHAMAS – A partnership forged between the government of The Bahamas and the United Arab Emirates (UAE) has made way for a multi-million dollar solarized project at the Thomas A. Robinson National stadium parking lot, which is expected to save the public purse thousands of dollars in power generation.

The 925-kilowatt grid-tied solar system will displace 310 thousand litres of diesel fuel annually, which will save the island $350 thousand dollars and offset 856 tons of carbon emissions annually.  Read more >>
Posted by Anthony Derek Catalano at 5:03 AM