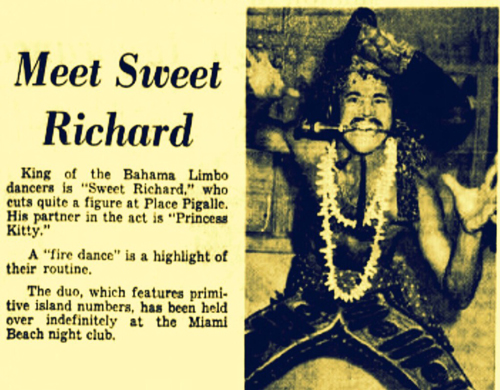 When someone has ‘gone‘, in Bahamianese language, that means they have died. And when someone dies, that is time for hollering “Oh Lawd, so and so gone.”

On 24th March 1964, all across Nassau, and in a few places in Miami, the ladies were hollering “Sweet Richard Gone.” Why would the ladies take to wailing for poor deceased Richard, one might ask? Well, the answer would be his youth, his swivel hips limbo moves and his striking good looks.

Richard George Dean had found fame as the exotic limbo and fire dancer “Sweet Richard.” Along with his partner, Princess Kitty, they performed in venues in Nassau and along Miami Beach, in front of packed houses, in a routine described as “an act packed with perpetual motion and sin.”

The duo were an incredible sensation, in the days when limbo and fire dancing, were top featured tourist entertainment. Everyone wanted to see how low they could go, under the stick, in the 1950s and 1960s.  Read more >>
Posted by Derek Catalano at 6:00 AM