Bahamas wants Caricom to be resolute with its position on Venezuela 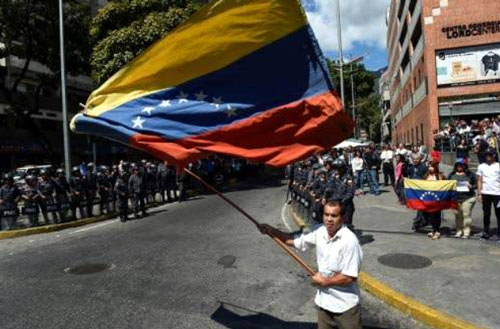 CARACAS, Venezuela — An opposition demostrator waves a Venezuelan national flag, during a protest against the government of President Nicolas Maduro, called by opposition leader and self proclaimed acting president Juan Guaido, outside Dr JM de los Rios Children’s Hospital in Caracas on January 30, 2019.

BRIDGETOWN, Barbados (CMC) – The Bahamas Government is urging the Caribbean Community (Caricom) grouping to be “resolute” in establishing a framework and a timetable to implement concrete measures to end the political instability in Venezuela as the region prepares to participate in an international conference to be held in Uruguay on the ongoing political situation in the South American country.

Bahamas Prime Minister Dr Hubert Minnis, in a letter to Caricom Secretary General Irwin LaRocque regarding the region's participation in today's conference in Montevideo being organised by Mexico and Uruguay, said Bahamas remains convinced that “Caricom can play a useful role in forging a productive outcome that will lead to the return of stability and peace in Venezuela”.  Read more >>
Posted by Anthony Derek Catalano at 5:09 AM