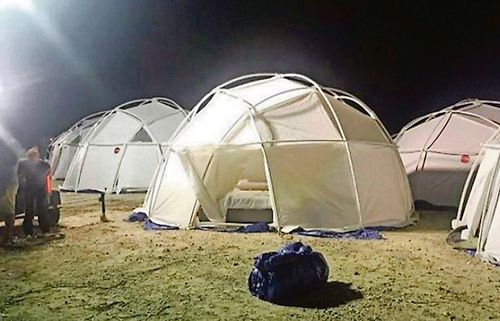 Tents at the Fyre Festival site for the event.

A Bahamian law firm and the National Sports Authority’s (NSA) former chairman are among the local persons and companies being targeted for examination by Fyre Festival investigators.

CF Butler & Associates, the law firm headed by attorney Craig Butler, who once unsuccessfully sought the PLP’s Nassau Village nomination, and LeRoy Archer, ex-NSA head and former managing director of BISX-listed Commonwealth Brewery, have been named among those that the Fyre Festival’s Chapter 7 trustee wants court permission to interrogate.

Documents filed on Friday with the southern New York federal bankruptcy court, which have been obtained by Tribune Business, reveal that Gregory Messer is seeking a court order to serve subpoenas on both Bahamian and US entities that supplied services/goods to a festival that became a chaos-stricken debacle threatening the Bahamas’ tourism reputation in April 2017.  Read more >>
Posted by Derek Catalano at 5:43 AM