The Yantian Express was travelling to Halifax from Colombo, Sri Lanka, via the Suez Canal, when the fire started 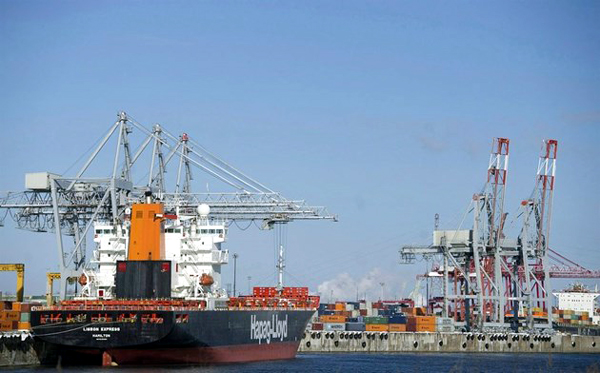 Container ships are shown in the Port of Montreal, Monday, January 4, 2016. THE CANADIAN PRESS/Graham Hughes

HALIFAX — A massive container ship that has been burning in international waters off Canada's east coast since Jan. 3 now appears headed for the Bahamas instead of Halifax, its original destination.

Satellite tracking shows the smouldering, 320-metre ship is being slowly towed to the southwest, travelling about 130 kilometres per day.

No one was hurt after the fire broke out as the ship sailed about 1,900 kilometres southeast of Halifax, but the vessel's 22 crew members were evacuated from the ship as the fire grew and the weather turned ugly.

Peter Ziobrowski, the blogger behind the Halifax Shipping News, says satellite data indicate the two tugs pulling the stricken ship have plotted a course to Freeport on Grand Bahama Island, which has a substantial container terminal.  Read more >>
Posted by Derek Catalano at 8:41 AM