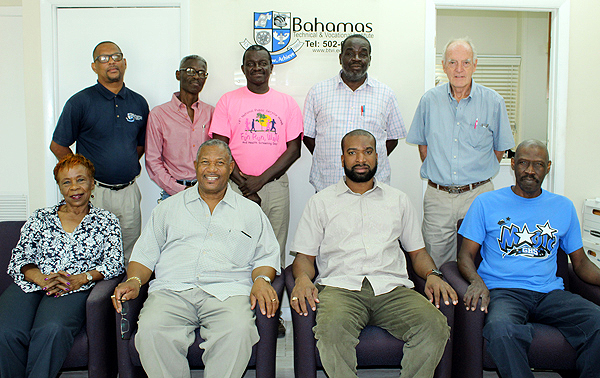 When Information Technology instructor at The Bahamas Technical and Vocational Institute (BTVI) Laurence Clarke was approached about teaching Introduction to Computers to inmates, he had reservations. Now that the 12-week program is coming to an end, he is excited about possibly engaging the next cohort.

Mr. Clarke is one of eight BTVI instructors who are participating in the Citizen Security and Justice Program, sponsored by the Inter-American Development Bank (IDB) in conjunction with the Ministry of National Security and BTVI. The partnership’s aim is to reduce the recidivism rate.

The vocational areas of training include Electrical Installation, Carpentry, Plumbing, Auto Mechanics, Masonry, Garment Manufacturing, Barbering and Introduction to Computers. The curricula are commensurate with that of classes held at BTVI. Graduation for the 125, inmates who are a part of the first cohort, is scheduled to be held on December 6th at Her Majesty’s Prison.

“Ironically, it is just as interesting and challenging as the classes at BTVI. The inmates are just as eager and I am eager to continue doing it,” said Mr. Clarke, who taught the Introduction to Computers class.
Mr. Clarke’s class consists of three females and seven males.

“Overall, it has been a new experience because as an instructor, we are subject to the prison’s regulations and it was my first experience training off campus. The fact though that the inmates chose which area they wanted to be trained in, it helped that they had an interest and all of them had a background in computers,” said Mr. Clarke.

“The experience has been excellent. It was a delight to work with them. One of the inmates said to me, ‘Ms. P, we are going to miss you. When you are coming, we could hardly sleep,’” recalled Ms. Pearson.

The class which had eight males and two females were introduced to fundamental components of the field including learning parts of the machine, sewing seam finishes and which to apply to certain fabrics, embroidery – which was a part of the needlework aspect of the course – sewing in zippers by hand and using the backstitch etc.

Ms. Pearson said she gained a lot from being among the inmates and recognized that once she went in with the right attitude, they treated her with respect.

To ensure sustainability of the program, six correctional officers have begun their Diploma in Fashion or Associate of Applied Science degree in Construction Technology and Information Technology Management at BTVI. This training expected to equip them to function as BTVI instructors working within the prison environment.

BTVI’s Associate Vice President of Academic Affairs, Leroy Sumner, who is coordinator of the program, said it was in the making for two years. He said it proves the institution measures up to the demands of the community, providing specialized meaningful programs.

“It allows those in spite of their circumstances to obtain some level of academic success that will be recognized by employers, and if they can’t find employment, they can create employment. They also have the option to return to BTVI upon release, so they can get a higher level certificate. There are unlimited opportunities for them,” said Mr. Sumner.

“It helps with the inmates taking a meaningful place in society. It will also help decrease the skills gap; even the inmate who might have a longer time incarcerated, their skills can still be used in the maintenance of government facilities, under the supervision of correctional officers,” said Mr. Darville.

“The officers taking up the AA in Construction Technology will be well rounded in each of the construction disciplines being taught to the the prisoners. They will be used as adjunct instructors. The BTVI brand will be in the correctional system,” he stated.
Posted by Anthony Derek Catalano at 3:14 PM