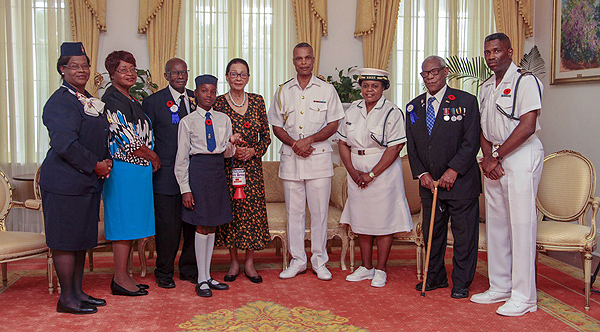 The official launch of the poppy season was held on October 30th at Government House by members of the British Legion-Bahamas Branch (BLBB) and the Royal Bahamas Defence Force.

The Governor General of the Commonwealth of The Bahamas, Her Excellency, The Most Honorable Dame Marguerite Pindling was the recipient of the first official poppy from a member of the Girls Brigade.  Also in attendance were Commodore Tellis Bethel, Commander Defence Force and Word War veterans from the British Legion-Bahamas Branch.

The British Legion-Bahamas Branch, along with all of its Commonwealth colleagues, will pay homage to all of the World War I Soldiers who fought from various countries 100 years ago between 1914-1918.  Read more >>
Posted by Anthony Derek Catalano at 5:53 AM